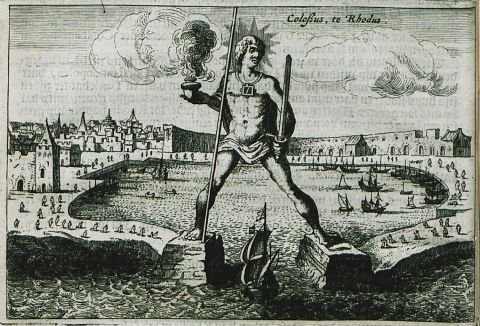 Here is what we know: it all started – as many things historically do – over a succession feud. After Alexander the Great died, three of his most trusted generals (Antigonus, Seleucus and Prolemy) starting fighting over who would be named his successor. They divided the vast sovereign teritorry, which Alexander had amassed, in three parts and each of them named himself king... But the battles between them and those regions that supported one or the other lasted for many long years.

Rhodes was caught into one of these fights. The inhabitants of Rhodes had sided over with Ptolemy and Antigonus, who was the ruller of neighbouring Cyprus, decided that he didn't appreciate that. So, he sent over his son, the mighty Demetrios, the so-called Conqueror, infamous for his strategic thinking and his talent in constructing innovative seige machines, to take over Rhodes.

Built in an easily accessible water front, the city of Rhodes was protected by strong and tall walls. So, Demetrios brought over the 'big guns' for this one: a giant seige tower mounted on six ships and 'helepolis', the monster of all seige towers, which measured 45x23 metres and weighed 160 tons! On top of that, Demetrios' army consisted of 40.000 men, more than the Rhodes' entire population. But, after one year, the city still stood. Here is when the accounts take two turns: some say that the Rhodeans managed to withstand the seige helped by luck (a storm that smashed the seige tower that stood on ships) and canning (they flooded the ditch on which helepolis stood and the construction feel into its muddy ruin). Others say that politicians from Athens intervened and broked a treaty between Antigonus and the Rhodean people. Either way, Demetrios finally up and left, leaving most of his seige equipment and weaponry behind, which the Rhodeans sold for the hefty fee of 300 talents (88 million euro by contemporary account!).

It was then decided that the proceedings from the sale should be invested in the construction of the most impressive statue of the time, built to honor Helios (meaning sun in Greek), the protector of Rhodes. Local sculptor Chares from Lindos was appointed with the heavy task, his credentials running high: he had studied under Lysippus, who was Alexander the Great's official bust scuptοr and had also created a 22m high statue of Zeus before.

The statue is thought to have depicted Helios standing up in the nude (or in semi-nude form wearing a short robe or holding a piece of cloth over his nudity), probably wearing a crown or being crowned by sun beams. His right arm was either held on top of his head to cover his eyes from the sun or, less likely, holding an ever-burning torch. It was built over an iron frame, covered in brass plates and standing on a marble base.

As the legend goes, mostly in later (medieval) years, Colossus was supposed to be standing with legs astride, set on either side of the harbor's entrance. Alhtough impressively romantic, this notion was dismissed by modern scholars as completely impractical for many reasons: ancient masonry didn't have the means to support such a large construction if so openly spaced, the open-legged stance couldn't have been considered very becoming of a major and respected mythological persona and, most probably, the harbor would have to be closed down throughout the 12 year costruction period, blocking the town's only means of purveyence and communication.

So, as historians, architects and mechanics supported in later years, Colossus probably stood in a more usual 'Greek' style statue stance, both feet together and looking straight, tall and suave, symbolizing liberty and justice over the enemy. If this rings a bell, it is because Colossus of Rhodes is the inspiration behind the Statue of Liberty in Ney York. During the 226 b.C. earthquake that destroyed it, Colossus' legs is said to have buckled under the pressure of its body, causing the statue to snap at the knees and fall over. Other accounts report that the brass plates started coming apart one after the other, causing a domino effect that took the statue apart one limb at a time. In either case, the construction faltered. When Prolemy III offered to pay for its reconstruction, the Rhodean people denied, because, according to the Delphi oracle, the building of the Colossus had offended Helios himself, who caused the earthquake to punish them for their insolence.

Ready to touch the myth?

So, there the broken statue remained, for the Rhodeans to remember and their city's visitors to admire, until the more practicle Arabs conquered Rhodes and saw a great commercial trade opportunity: they fished out the remains and sold them to a Jew merchant...

More on a video (in English)

Akrotiri settlement in Santorini gives its visitors the rare chance to travel... Akrotiri at Santorini: A day in the prehistoric life