Mostly known for its great beaches, high-end hotels and trendy night life, Mykonos might not strike its visitors as a destination of rich historical interest. Unless not at first and not until they discover the island's many interesting museums, which record cultural, political, financial and other everyday activities for more than 5.000 years. So, let's take a trip down history lane, by visiting Mykonos' distinctive museums and browsing through their collections in chronological order. 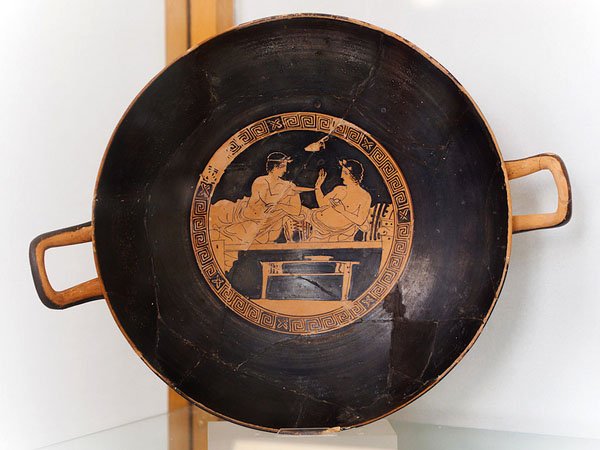 Built on a hill above Chora's harbour, the Archeological Museum of Mykonos is actually one of the oldest of its kind in Greece. Originally, the building followed the neo-classic architectural trend, but after two reconstructions (in 1935 and 1970), it ultimately acquired its classic cycladic form, with the flat rooftops and white coloring. The museum consists of an antechamber, six main exhibition rooms and an arcade in the back, which house sculptures, sepulchral items from Rhenia*, as well as findings from excavations in Mykonos and all over Cyclades and Greece. It is important to mention that the museum holds one of the largest collections of ceramics, representative of the cycladic angiography and dated since the 8th and 9th century b.C.

A statue of Hercules and another one of Aphrodite, welcome the visitors as they enter the antechamber. In Room A, the visitors may then wander through a wide collection of pottery items, miniatures, clay idols, weapons & jewellery, dating as far back as the 3rd millennium b.C.

Room B contains an array of the most well-known types of crates (i.e. amphoras, hydrias etc.), decorated with geometrical or animal forms and originating mostly from the neighbouring islands of Paros and Naxos.

Room D is where headstones from Rhenia* are exhibited, while Room E houses the museum's most famous artifact: an amphora with anaglyphs representing scenes from the fall of Troy.

*Rhenia is a small island between Mykonos and Delos, which used to serve as a burial ground.

The Aegean Maritime Museum is housed in a building that used to belong to the legendary captain Nikolaos Sourmelis. Its main attractions are the models of all the types of ships that have been sailing across the Aegean throughout Greece's naval history: as early as the preminoan ages and as recent as the 19th century, the vessels depicted here have been powered by rows, sails and steam engines. On display is also a large collection of documents, engravings, ancient coins, measures, amphoras and navigation instruments.

Walking around the museum's elegant garden, the visitors may also admire reproductions of ancient epitaph sculptures with marine themes, as well as the tower and mechanism of the Lighthouse of 'Armenistis', which lighted the way to the island back in 1889. 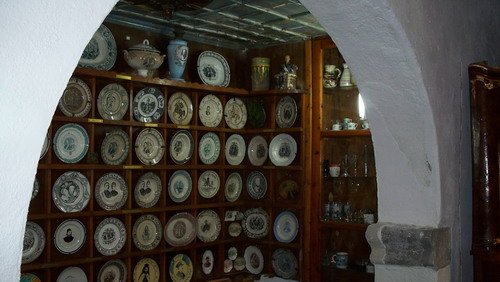 Third stop: From the Middle Ages to Bourgeoisie

Very close to the famous landmark of Paraportiani, one of the island's oldest houses and home to one its most famous captains, Nikolaos Malouchos, has been turned into Mykonos Folklore Museum. The visitors may admire the structure and equipment of a typical upper-class mykonean home, through a collection of furniture, byzantine icons, marbles from Delos and other exhibits. The collection spreads out in three rooms, and the museum's guides are usually young children taught in the art of storytelling.

The museum also displays two exquisite collections of folk artifacts. The first is a collection of 'tamata' (items dedicated to Christ, Maria or the Saints of the Orthodox Church) donated to the museum by Mrs Thomopoulou. The second is one of the largest collections of commemorative plates, the museum owner's, Mr Kyriazopoulos', personal collection. Weaved and embroidered textiles, old keys, weighs and meaures, ship models, important handwritten and printed documents, maps and traditional musical insturments complement the museum's collection, while a surprise is waiting the visitor's going down to the basement: they'll run into a ship model from 1821, some canons and the infamous pirate Mermelechas' well!

Part of the Mykonos Folklore Museum, these two subdivisions offer a more comprehensive look into the island's past. The Agricultural Museum (first of its kind in Greece) is an open-air structure, showcasing all the traditional agricultural facilities used in Mykonos for the production and processing of the local crops. It contains a threshing-floor, a bakery, a well and a treadle and its highlight is the fully restored Bonis' Windmill.

Lena's House is a traditional mykonean middle-class house of the 19th century. It showcases an interesting collection of European and local 19th century furniture, positioned in their 'natural' place and use within the rooms, plus many decorative (embroidery, mirrors, engravings etc) and other daily used household items.