In Santorini and most other places that have been occupied by the Venetians, the castles are called 'kasteli' and they are distinguished between 'Goulas' (a word deriving from the Turkish 'koules', meaning tower, observatory) and the general use of the word 'kasteli', meaning the fortress type settlement usually developed around the main tower of goulas. There are five kasteli on the island, signifying the five most important villages, where the bulk of the island's agricultural and administrative activity was conducted. Santorini's kasteli have all similar characteristics, maintaining the form and shape of a closed community, with a clear-cut social class system and reaction protocol, both for day-to- today activities and in case of a danger. The development of this type of settlement came as a reasonable reaction to the threat of Pirates who overran the Aegean sea during the Middle Ages. They came from Asia (Turkey, Mauritania), Africa (Algeria), Europe (Genova, Spain, Corsica) or even mainland Greece (Mani), looking for plunder around the coasts of the Mediterranean. The Greek islands, especially the smaller ones in Cyclades, offered easy access to small, natural coves, which the pirates could use as anchorage to terrorise and pillage the surrounding area. As a result, the lords and villagers, started moving their settlements on higher and not easily accessible grounds, as far away from the coast as possible, building fortresses to protect their properties. Enter the 'kasteli'! 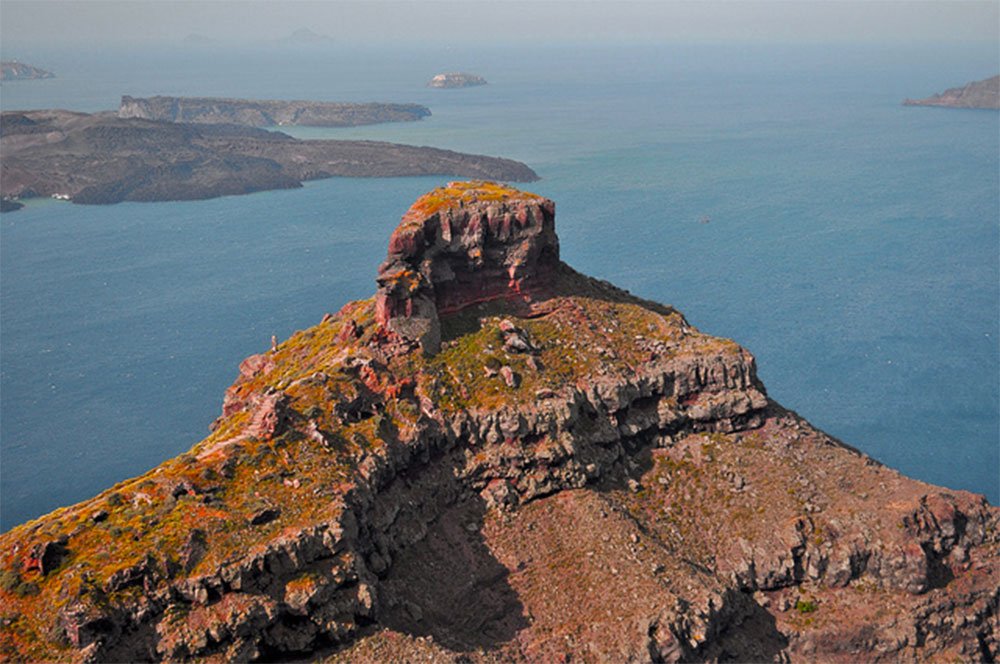 Kasteli of Scaros at Imerovigli

Probably the oldest and most prominent settlement of all, guarding the island's capital and offering a staggering 360° view of the Caldera, the kasteli of Scaros boasts a reputation of 'never having fallen into enemy's hands'. This 'untaken' kasteli was a fortress built on a conical rock, with private and public stone buildings gathered in close proximity around a labyrinth-like road network, connected with the outside world only by a wooden mobile bridge.

Throughout its long history, the kasteli of Scaros has become the background of many interesting events, as many known lords and nobles have occupied its residencies. It was originally granted as a seat of the Barocci family who first ruled Imerovigli. In 1480, Dominique Pigani (the Duke of Crete) received Scaros' kasteli as a wedding gift for his betrothal to the Duke of Naxos' daughter. In 1642, it was reassigned as an episcopal seat, with Latin, Catholic and Orthodox settlers flocking the settlement and building more residencies, courts, churches and monasteries.

The kasteli was heavily damaged during the 1650 volcanic eruption and was gradually abandoned in the 17th and 18th centuries. The pirate threat had subsided by then, and Scaros' inhabitants, asphyxiated by living in such a narrow space and afraid of the constant landslides, decided to move to the neighbouring village of Fira. 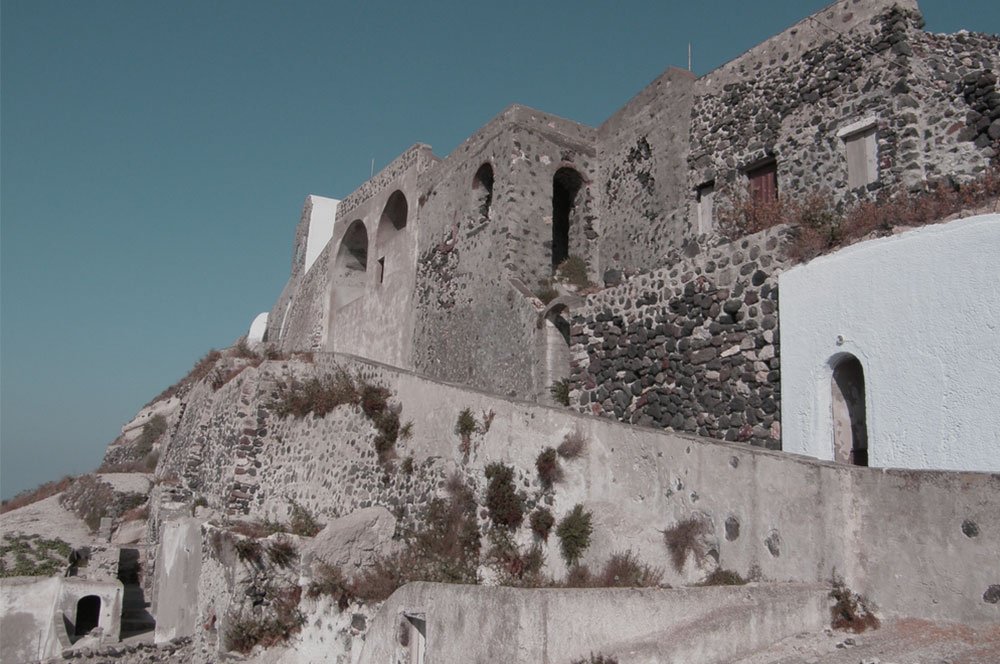 Simiral to the fortress settlement of Scaros, the kasteli of Pyrgos was also built around a central goulas, which later became a church. The houses here, narrow, long, two or three- storey high, were also constructed in close proximity to one another, sharing side walls, their outer walls forming the bailey of the castle. At least 70 families lived in the settlement, each with their own house, complete with a toilet and water tank.

The only entrance was in the west side of the castle, always closed after nightfall and remaining closed in times of danger. But the inhabitants of the Pyrgos kasteli ad also constructed a secret tunner to communicate with the outside world, which unfortunately collapsed during the 1956 earthquakes and has since been burried under debris. After the danger of the pirates passed, the settlement of Pyrgos started opening up, its houses acquiring windows, doors and balconies. As a result, a lively new settlement was created, just outside the castle's walls, with the fitting name 'Xeporto' (meaning 'outside the door'), which actually became the home of the first School of Thira in the 19th century.

Constructed during the first century of the Venetian rule, the kasteli of Akrotiri was called La Ponta and was built around a pre-existing goulas and following the typical fortress architecture model and social structure common during Renaissance. The powerful lords resided in the main towers and the rest in the houses around them. All buildings were wider at the bottom, with a unique vaulted entrance, bolted iron doors, no other opening on the ground floors, ramparts and battlements on top.

Akrotiri was a rather poor settlement, its main agricultural activity restricted in the cultivation of cotton, not grapevines as in other, more affluent villages. As a result, the fortress was one of the first to open up, in an effort to take advantage of the surrounding lands to grow more crops. A typical closed society with clear social classes, the kasteli of Agios Nikolaos in Oia was ruled by foreign aristocrats, the local retaining a clear subordinate role. Noble Catholic families from Spain, France and Portugal were settled here. Their residencies were carved into the rock and two or even three-storey high. Due to the rocky terrain, the settlement could not be extented further, resulting in a network of very narrow, mazy streets.

The most impressive residence was the one higher on the top of the settlement, belonging to the Castelan of the Upper Side (Ano Meria). There lived the kasteli's lord, of the Darzenta family, surrounded by relatives and other noble men. They even had a medieval type of 'Officers' Club' for their entertainment. But the Castelan was a good ruler: during his time, the castle walls were fortified, the crops were extended to include cotton and vines, and he even built windmills and bakeries to keep the grinding of barley and fava beans and the baking of bread in house, or rather in castle! 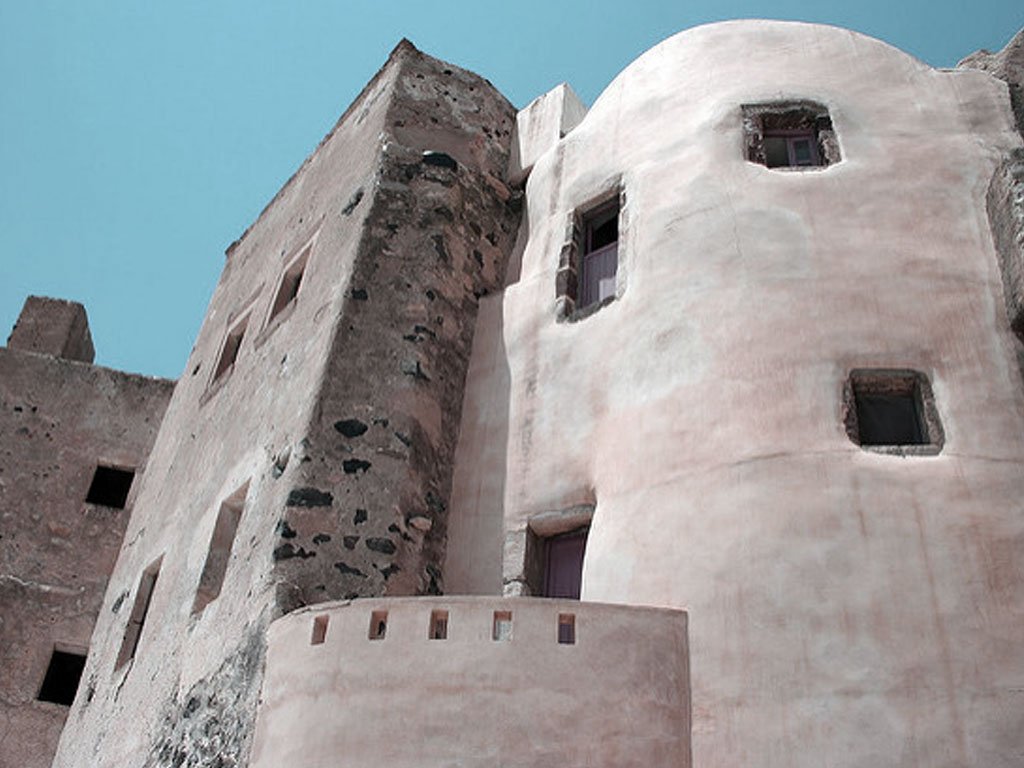 The best maintained fortress settlement on the island, the kasteli of Emporio was a small labyrinth of narrow streets, where only one person could walk through, and side-by-side buildings with steps carved almost vertically on the rock, vaulted roofs and bridges connecting everything overground. All construction followed the flow of the surrounding landscape, the malleable volcanic ground giving impressive plasticity into the shaping of the buildings. The settlement was extended outside the castle walls in later times, to include eight windmills on the hillside of Exomytis.

The religious and ecclesiastical element are more prominent in this kasteli, with many impressive churches still standing today. The goulas, seat of the lord and the tower used for the protection of the nobles and crops during pirate raids, was later used as an appendix of the monastery of Saint John of Patmos.