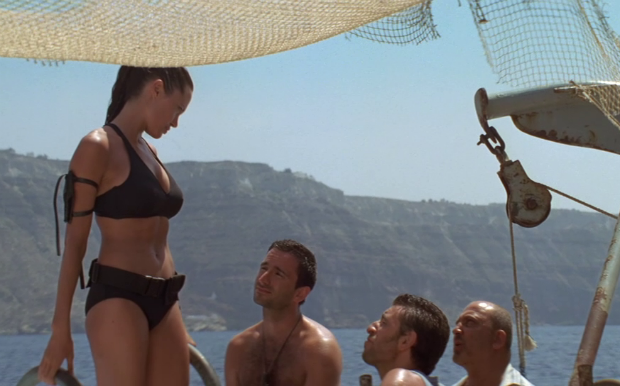 A great earthquake undercovers the Luna Temple, built by Alexander the Great, underneath Santorini. Then, the myth of Pandora’s box, Chinese crime lords, a nobel winning scientist-turned- bio-terrorist and the game world’s most famous female archaeologist all blend into this second movie installment of the Lara Croft franchise. Or was it just an excuse for dear Angelina to learn how to jetski and scuba-dive?

Check it out: The film’s impressive opening sequence shot on location in Santorini

Three 18-year- old Italian boys, just out of high-school, travel all the way to Santorini, following – what else – a girl! Matteo, Paul and Manuel discover their next stage of maturity, at this sweet and comic coming-of- age tale that will remind every viewer at least one summer during their adolescence.

Check it out: A short, but very enlightening, teaser

“Sisterhood of the Travelling Pants” - directed by Ken Kwapis, 2005

Starring Amber Tamblyn, Alexis Bledel, America Ferrara and Blake Lively Based on a series of young adult novels, this movie and its sequel (also partly filmed in Santorini three years later) narrate a feel-good tale of love and friendship between four very close friends and a pair of jeans that fits them all.

Check it out: The film’s trailer (of course, the part in Santorini goes first!)

Older but still attractive art dealer decides to leave all that hurt her behind in Germany and packs her bags for Greece, there to find a welcoming pension owner, a new job and a new love waiting for her. The German version of “Shirley Valentine” was just a cute TV film that failed to do for Santorini what the British comedy did for Mykonos.

Check it out: You actually watch the entire film here (for German speakers)

A playboy and a prude fall desperately in love, while more than their different world views should have kept them apart: a tale as old as time, with two beautiful film stars from Philippines looking radiant under the Greek sun.

Check it out: The girl can sing too! A music video of the same titled song, featuring many of the scenes shot in Santorini

This crime action film with a soft side became the ‘come-back’ vehicle for Indian superstar Salman Khan and went on to break many box-office records. Following the story of a gangster who falls in love with a middle class girl that does not approve of his word and wants him to change, the film’s crew came all the way to Greece to film some of the movie’s most memorable song sequences on the islands of Santorini, Paros and Rhodes.

Check it out: Salman and Aysha sing their love to each other in some of the most beautiful spots in Oia (and there is some Paros in there too!)

This odd thriller tells the tale of a man leading an unfulfilling corporate life in London who discovers the new meaning in life behind a closed door in Santorini. Throw in a human clone left for dead and you’ll definitely get one of the murkiest and weirdest films shot on the island – or anywhere for that matter…

Check it out: A – spooky – taste of the film

A girl living in France falls in love with an Indian boy at this breezy entertainer, oddly (?) reminiscent of Billy Wilder’s 1957 film titled “Love in the Afternoon” and starring Audrey Hepburn and Gary Cooper. Still, it gave the filmmaker’s the opportunity to film some beautiful sequences on top of an active volcano. Not bad at all!

Check it out: The song “Nenjil Nenjil” from the film

Can love be rekindled? This TV movie follows the starring couple on an international journey of discovery from New York to Santorini, but in truth seems only to be the excuse for the entire cast of “Law & Order: Special Victims Unit” to participate in a film together!

Check it out: The movie’s official trailer

Do it the right way during summer 2015 Santorini wine tours